Why I Ran my First Half-Marathon After Becoming a Mom

This year, I trained and competed in my first ever half-marathon. A lot of friends and personal training clients were surprised to learn that. After all,  I have been running for over 7 years and have trained them for distances up to the marathon.  The thing is, like many coaches, what I do and what I coach are not the same. Usain Bolt's coach, for example, was never a sprinter and many coaches who train Olympic athletes have never been Olympians themselves. I was naturally better at running shorter distances, so that's what I focused on until now. I just did not see the point of training for endurance when I would get better results in competition by focusing on speed. So what made me change my mind?

What to do When Your Speed Seems to be Gone: Have Fun!

When I came back to running after a pregnancy and maternity break of about 9 months, my speed was no longer there. Also, as part of my post-partum rehab, I was told to avoid the type of training that helps develop speed, like plyometrics, hill sprints, weightlifting for power, pushing or pulling weights while running, until my core and pelvic floor had fully recovered. My first race was the 2016 Night Race, 5 months after the birth of my dear daughter. With a chip time of 28:57 for a 5k, it appeared I had become more than 7 minutes slower for that distance than when at my peak fitness. Adding to that, I had some pelvic pain at the end of the race. It looked like I would have to spend some time just doing some easy running before I could even start trying to get my speed back... At first, it got me a bit depressed. But then, I started seeing this setback as an opportunity to try and enjoy new things. For the next six months, I focused on rehab and did a few fun and easy runs with friends and the West Van Run Crew. 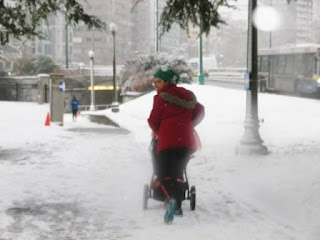 Making the Most of the Post-Baby Endurance Boost

After my rehab was complete, I tried to get my speed back and even joined my track & field club for sprint workouts once or twice a week. When the sprint competition season started, I discovered that the training was not enough to get my speed back. In fact, I was slower than ever before in my life. My endurance, on the other hand, had not been as affected. In fact, it seemed to be improving faster from training than it used to. I had read about how women might become better at endurance sports after pregnancy (Does childbirth improve athletic ability?, Might pregnancy be a boon to female athletes?), but was so focused on what had been lost, that I did not even consider that some things had improved post-pregnancy. My mileage and endurance training was very minimal, yet I had managed to get back to running 5ks and 8ks without walking breaks quite quickly. It really seemed like training for and completing a half-marathon would be easier now than in the past. 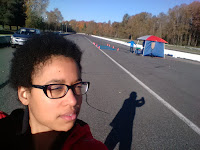 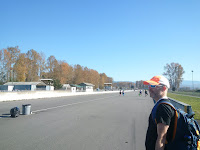 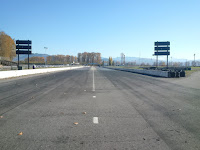 After a year without personal records, I really missed the feeling of achievement and the confidence boost that comes with doing something better than ever before. Training for a new type of race would allow me to test my limits differently. It would also help motivate me to get out and run at my new slower pace. It is quite exciting to be able to go out for a training run knowing that it will be one where you will run longer than ever before! It is also quite liberating to be able to toe the start line of a race without strict time goals. In fact, instead of a minimum pace to run at, I had a maximum pace to run at for my first two kilometers, to make sure I would be able to finish the race. No pressure, just fun. For the first time in a while, I really enjoyed myself during the race. Having fellow Crew member Bradley running most of the race with me and the friendly volunteers at the Mission half-marathon really helped too.

In the end, I think that doing my first half-marathon as a new mother was the best decision I made as a new mother runner. If you are also a new mother, or feeling like you have hit a plateau in terms of speed for some other reason, I recommend you give something new a try. It could be a new distance (marathon, ultra), a new type of terrain (cross-country, trail, mountain), or even a new type of race (orienteering, obstacle, fell). It helped me fall in love with running again. I hope it will do the same for you! 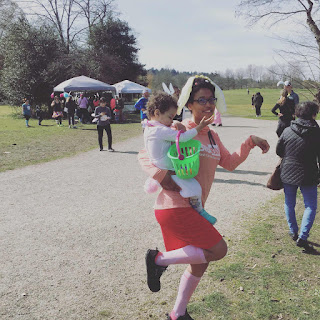 Running Tours Inc. events are always a lot of fun for my little one and I, and this one was no exception. I had originally planned on racing the 5k and attempt to win it. However, I had not had the chance to train when visiting family in Europe, so I chose to bring my little one along for a ride in the jogging stroller.

After finding parking near the Jericho Sailing Club, I walked around to look for the the starting area. Some volunteers pointed me towards it and as I walked towards the beach I let the music guide my way. The area looked like someone was having a bunny-themed birthday in the park. Family-friendly party music was playing, kids were running around, people wearing bunny ears, children petting dogs, parents pushing strollers around and a table where kids could colour their bib. I also recognized many familiar faces, some in great running costumes.
After picking up my bib and ears and socializing with running friends, I moved towards the start line in anticipation … 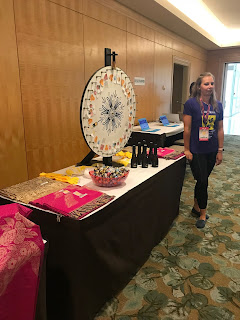 This year, I chose to spend my Mother's Day morning without my little family. Instead, I chose to treat myself to a morning run with friends and hundreds of other mothers. I remember feeling a little bit selfish in the morning when I managed to wake up before my little one, leaving her and my partner home as I jumped in the bus towards Downtown Vancouver. I remember justifying my decision my head. Mother's Day is about celebrating mothers and thanking them for al that they do by making them happy. What makes me happy is racing and I cannot do that while pushing a stroller. So it makes sense that I would just go out to race on my own. By the time I got to the Westin Bayshore hotel to get the shuttle to the start line, I had come to terms with my decision and was ready to just have fun.

Before the Race
I came with my bib already pinned on as I had come to the early package pickup the day before to try to win prizes. When spinning the wheel, I did not win champagne or a pashmina … 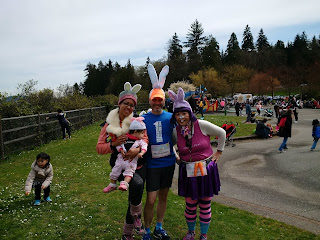 If there is one thing that my first post-baby running year taught me, it's to run to have fun and feel good after. I hope I can help my daughter learn that too.

Before becoming pregnant, my main motivation was to earn personal bests and age-group medals. That became a lot harder after months off running combined with hormonal changes took my speed away. I know it will be a while before I can get PBs again...

Still, my running friends are very supportive and always happy to see me at races. My little one also does not like me keeping her in a stroller without moving. They were my new biggest motivations to get back to running. First, I shuffled on my own. When my baby became old enough, I did a few runs and races pushing her in the jogging stroller. I even walked a fun "run" while holding her in my arms most of the way!

At all the running events I took my little one to, it lookes like she just loved being there! She loves the music and watching people warm up. She returns… 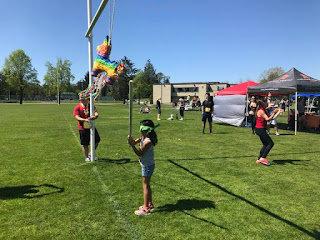 As I am remembering the Big Fiesta Run, I cannot stop smiling.  My initial plan was to run this race just for fun, without a watch and see how things go. The race itself was not time chipped and on trails, so it would not have made sense to chase a PB there anyway. Also, with the Running Tours team putting so much effort in making their events as fun as possible, I did not want to risk missing on any of the fun to be had. In the end, I did not manage to resist looking at my watch but still got to smile and feel like I was partying for most of the run.
Pre-Race Festivities
My little family and I came an hourly early to make sure I would not miss the kid-friendly activities and warm up. The festivities started with the beating of a pinata and a "parade" of colourful costumes. One tall runner wearing a rainbow colored poncho stood out in the crowd. I walked towards him to get a picture for the blog. With his sunglasses and fake moustache, it took me more than a few seconds to …